Last week, my sister N and I visited York for a good ol' chat, bit of shopping, and - naturally - a cream tea. We wanted a 'proper' afternoon tea, complete with sandwiches, scones, cakes, a choice of leaf teas and the right atmosphere. Everyone recommended Betty's, but we were after something a little different, a little less obvious, a little less touristy. Eventually, after much debate, we settled on The Grange, a beautiful hotel a short walk from York Minster. Everything about it boded well - the rich 'heritage'-type décor of the Morning Room, the friendly staff and indeed, the menu. 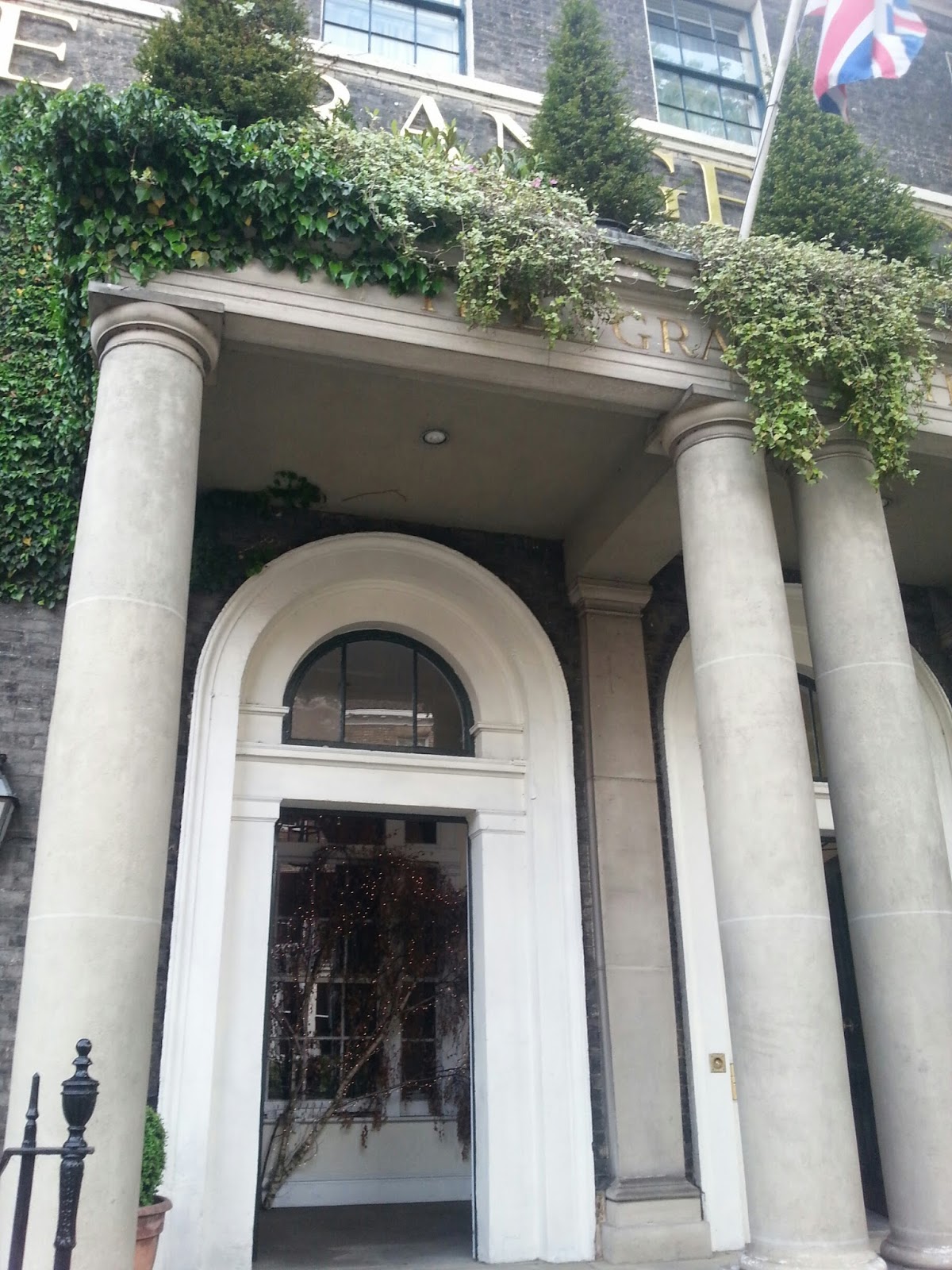 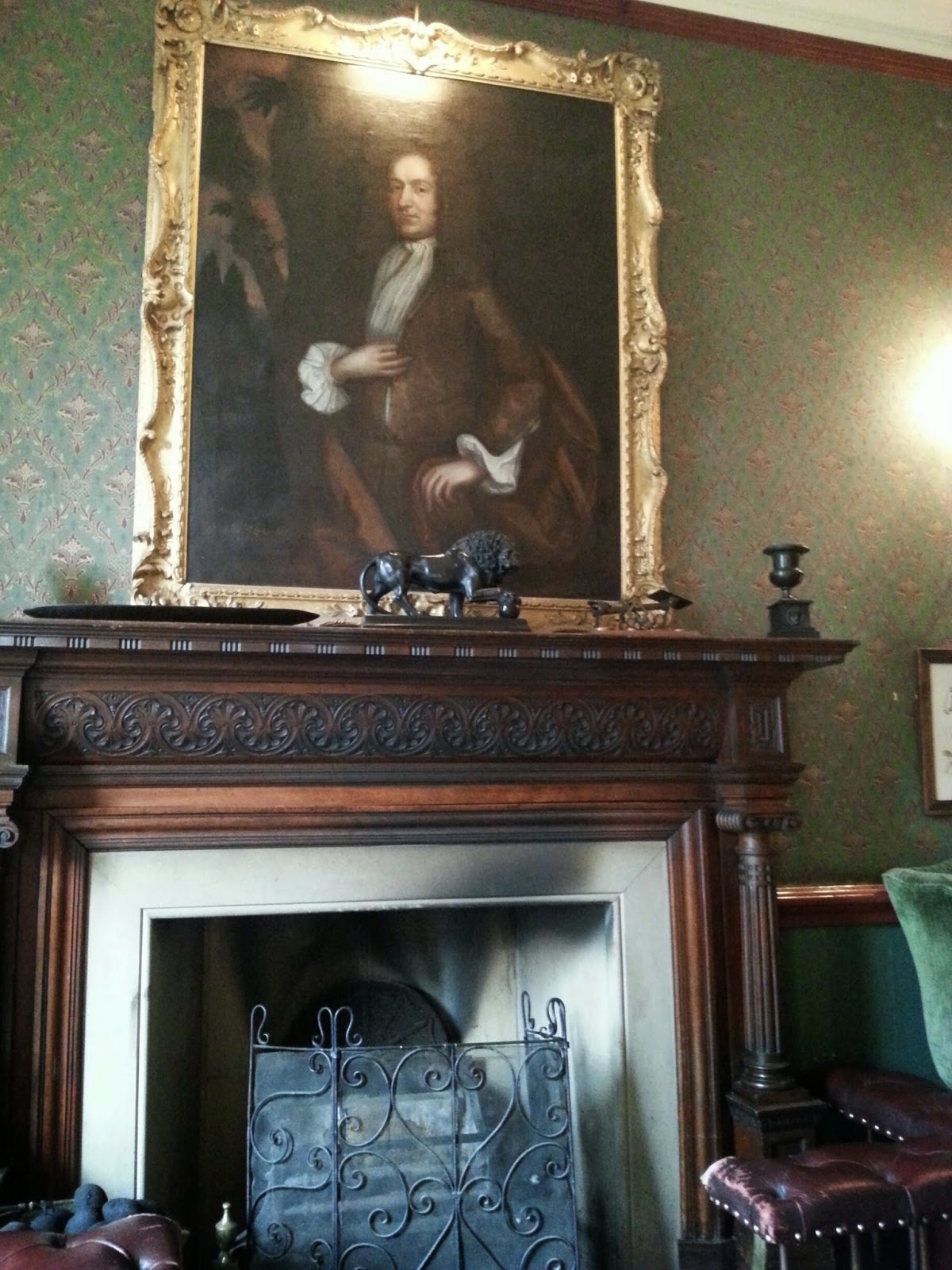 A Full Afternoon Tea for one was available for £15.50, including a selection of finger sandwiches, rhubarb scones, little cakes and a selection of high quality leaf tea. Lovely, thank you - we'll have two. Hang on. Did it say rhubarb scones? Yuck. I can't stand rhubarb - it find it far too bitter. To me, it seems a bit too much of an acquired taste to have on the menu without giving an alternative. I like a fruited (sultana or cherry) one best. At first the waitress said rhubarb scones were the only option, but the disappointment must have been evident on my face because she went to ask the Chef, who miraculously found some plain ones. Phew - crisis averted. N wanted to try the rhubarb ones, so we ordered two of each, and sat back to await the arrival of what promised to be a delicious meal.

Our teas came - Assam for N, Earl Grey for me. A few points fell by the wayside immediately - stoneware teapots and cups - oh dear. But worse was the ludicrous leaf tea to water ratio within the teapots. They were at least two-thirds full of tea. So much so that the tea 'plopped' out of the spout into the tea strainer, rather than flowing. The Assam was far too strong, the Earl Grey was unrecognisable. Not a great start. We asked the waitress for a refresh, and more hot water, and she brought it quickly with no fuss. Right - we're back on track. 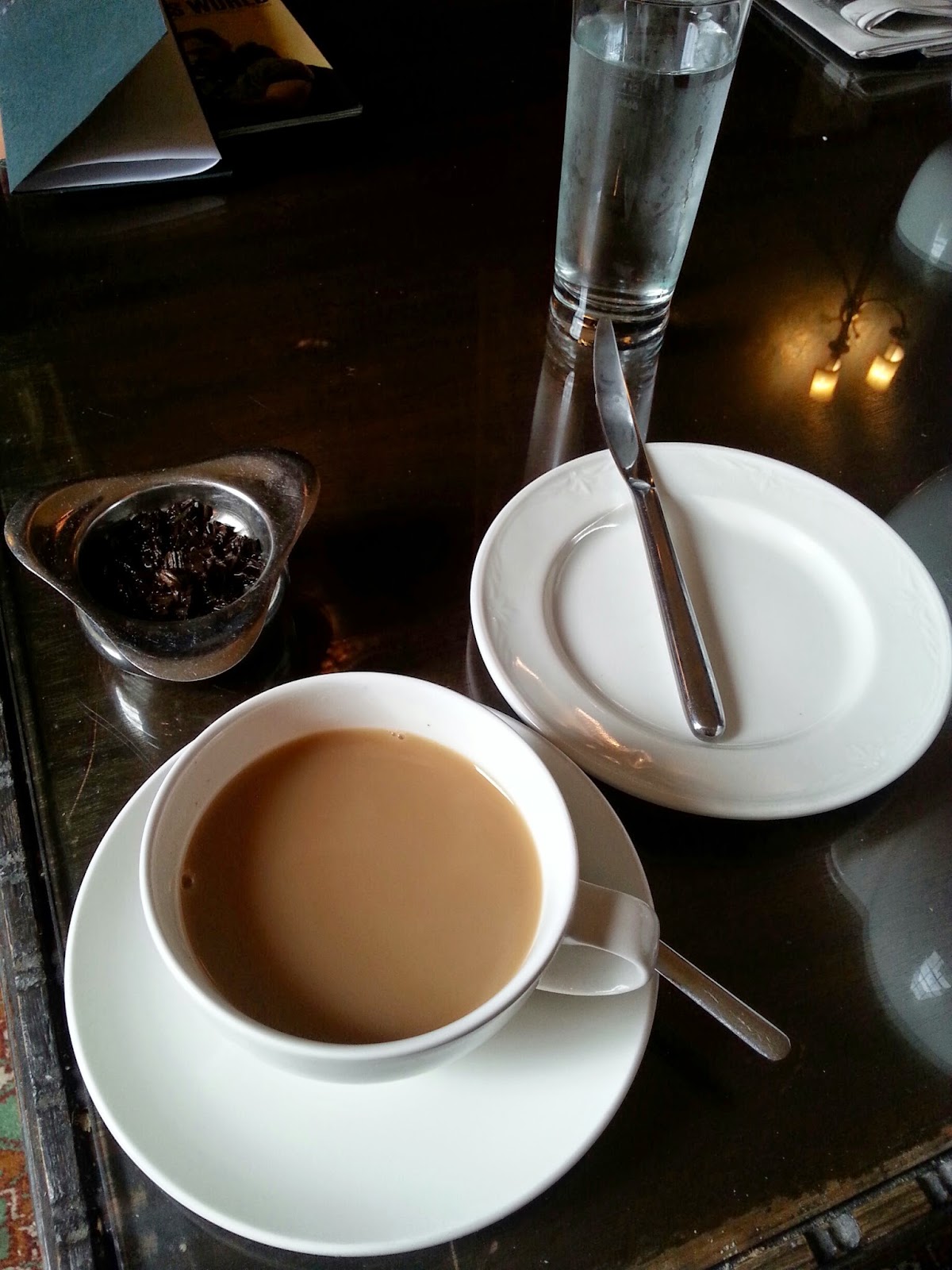 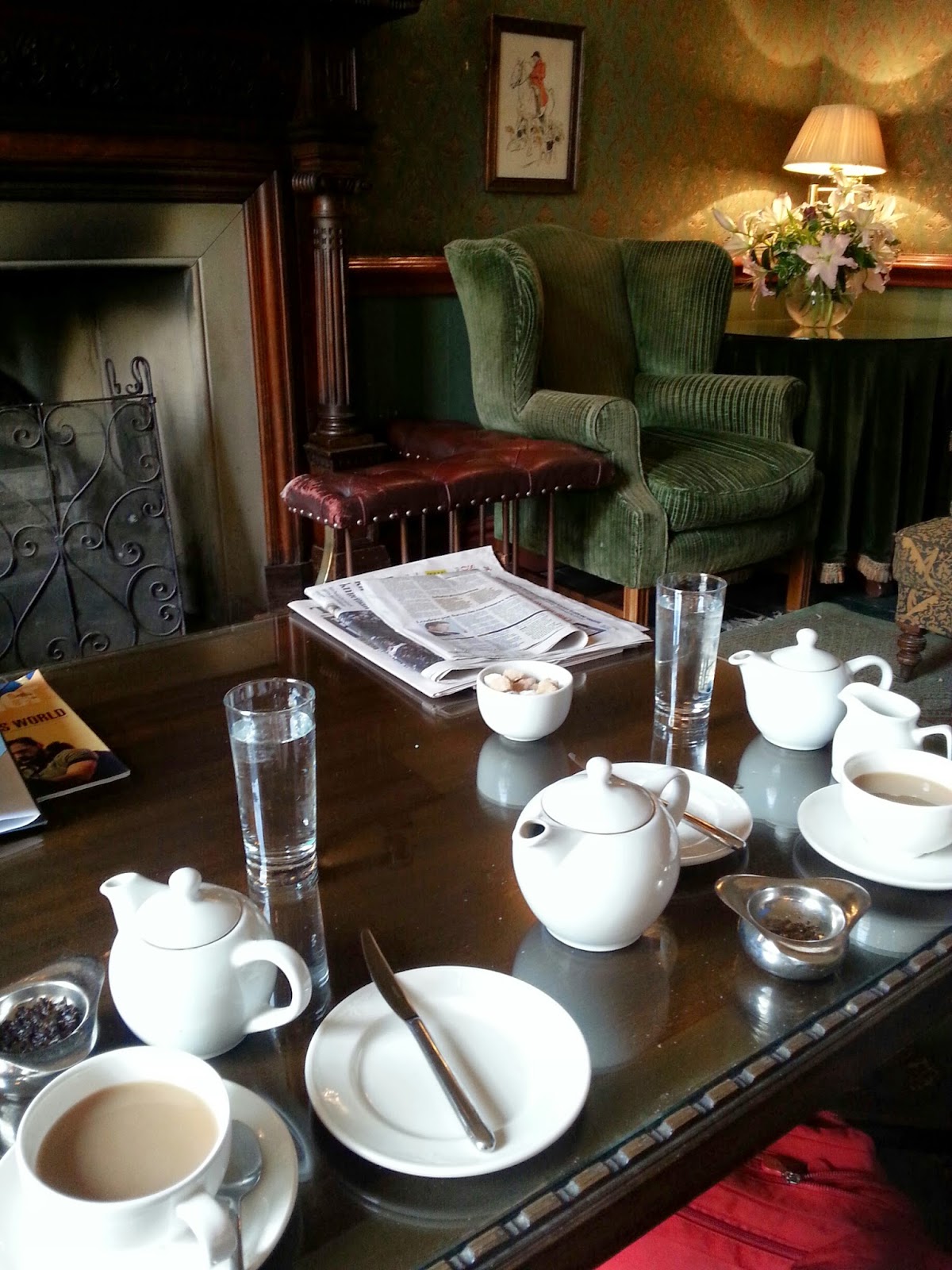 A large, impressive cake stand was brought out with great ceremony. We had been given a choice of sandwich fillings, and both being fond of the classic egg and cress, we'd ordered some of those. We were a little disappointed to discover they had been made with sandwich spread rather than mayonnaise, but no matter, they were very nice. We moved on to the scone tier. A tiny sliver of cake, which we decided must be Yorkshire parkin was included with the scones for no obvious reason - perhaps to remind us we were in Yorkshire? It was so thin it was almost transparent, and really not worth it. Anyway, on to the scones. 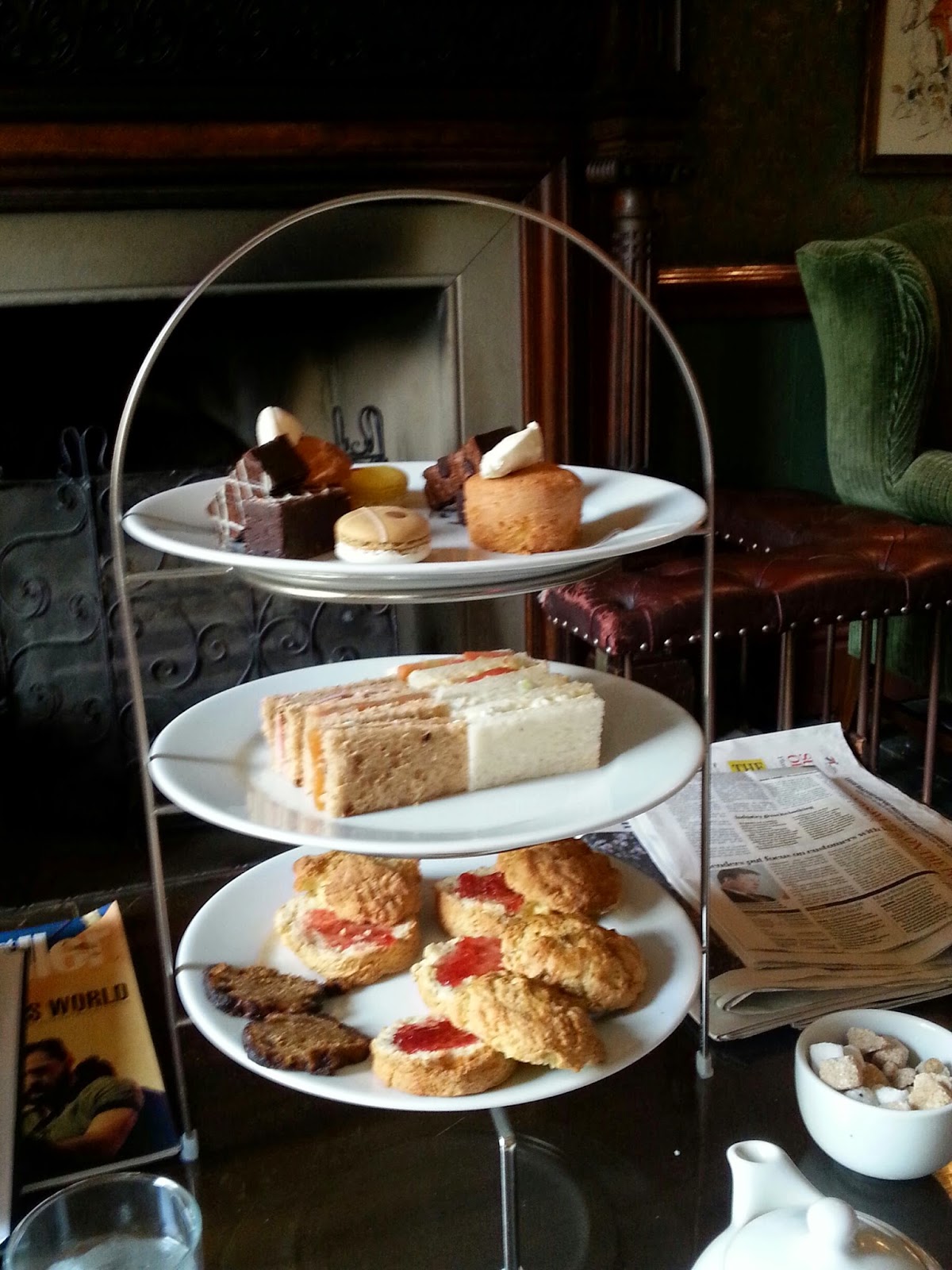 I reached for a scone - no way to tell it if was a safe plain or a dreaded rhubarb one - and found it warm (great) and already sliced (ok). But I was not expecting it to have had jam spread on it already! And worse than that, apparently the clotted cream had already been spread on it too! But because the scones were warm, the clotted cream had melted and congealed in a greasy, buttery mess around the scones, making them soggy and prone to breaking apart. Oh dear oh dear oh dear. This was not good. 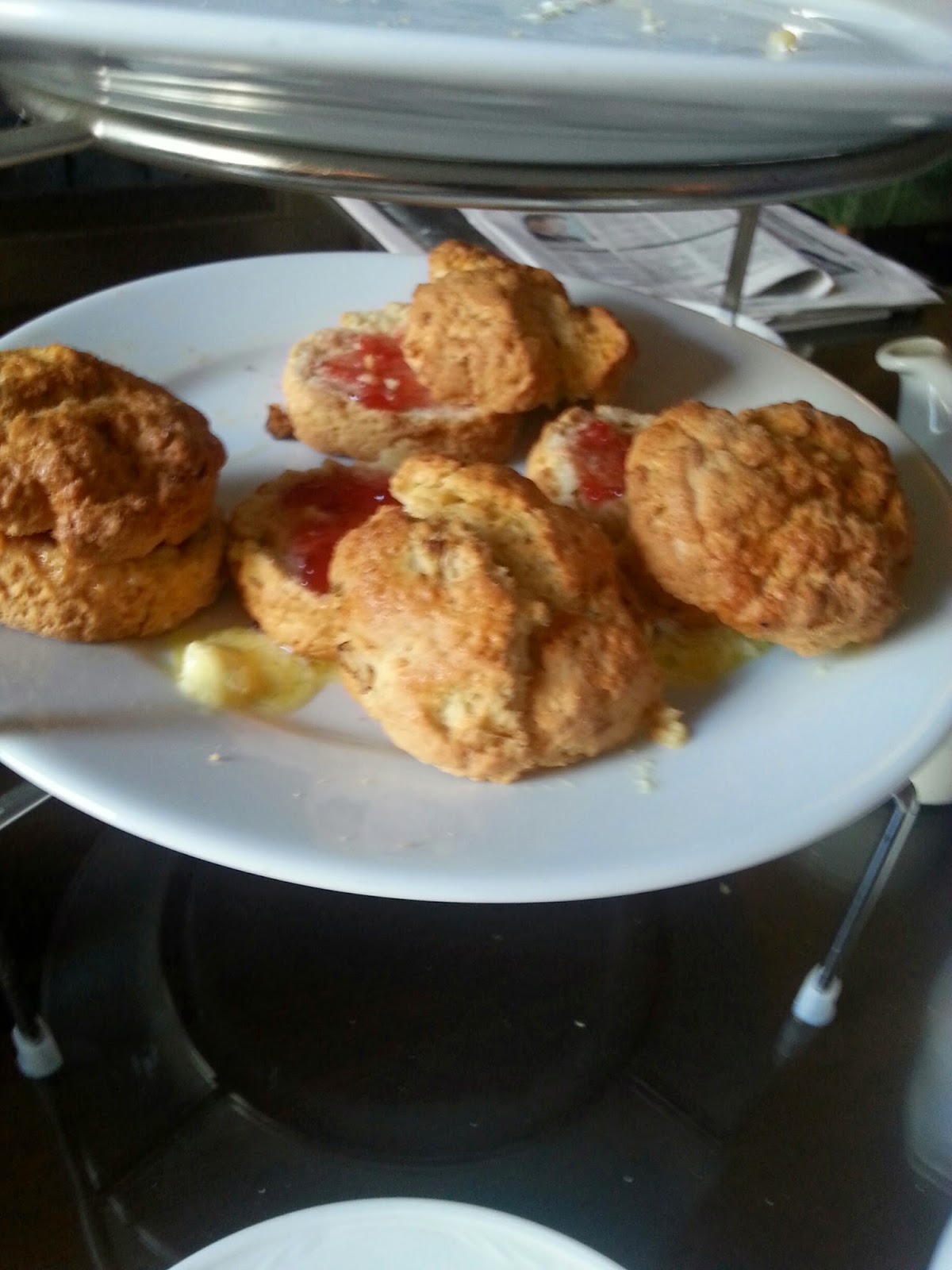 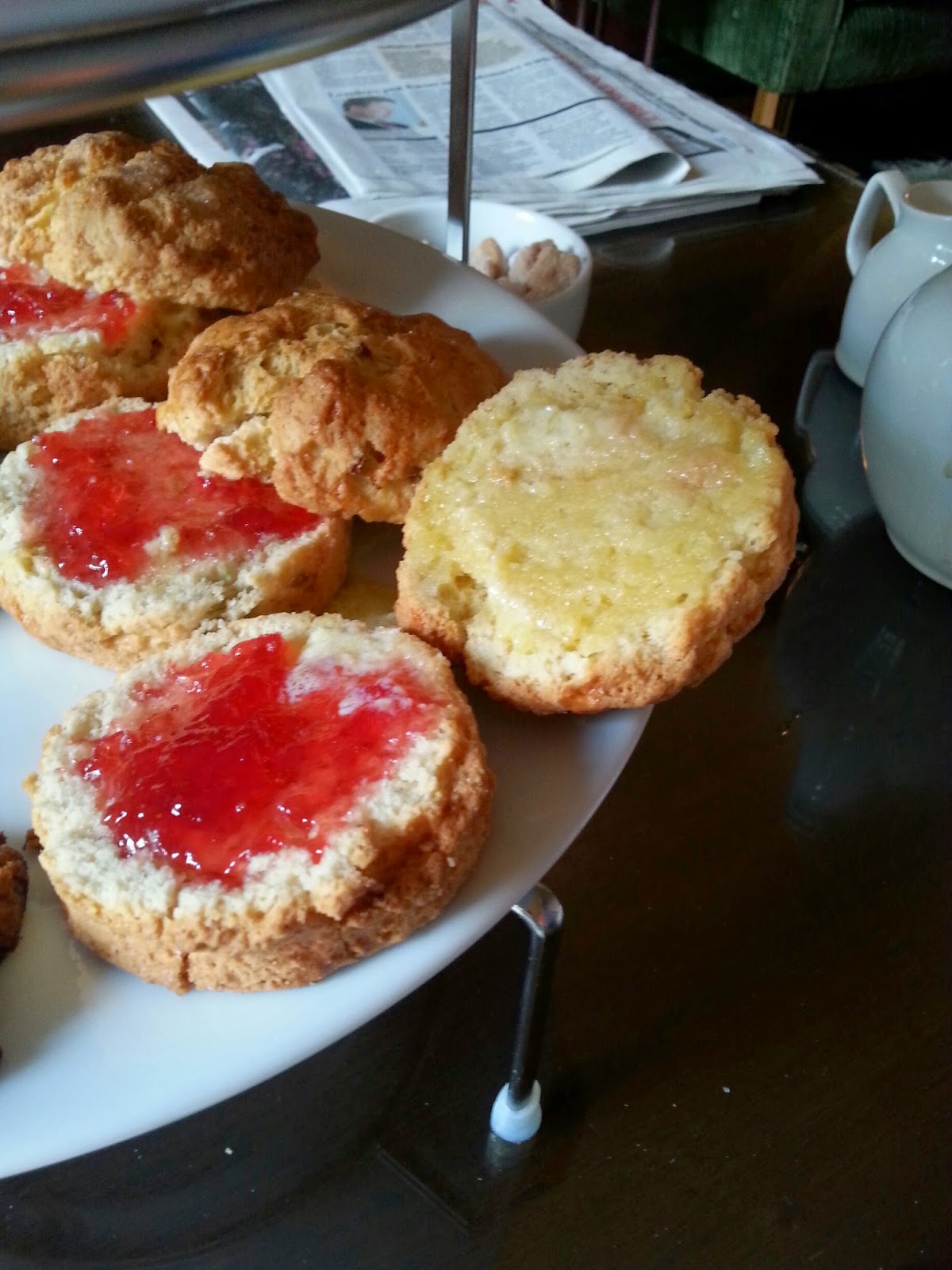 In a desperate attempt to rescue the situation, and have something to show for our long-awaited, special-girls-day-out tea, we asked for more clotted cream and jam so that we could do the condiment spreading ourselves. Personally, I like to take a scone, divide it into two halves and put jam and cream on both sides - decadent, I know, but that is half the fun - and not to have this done for me. They brought out two individual-sized jam jars, which just about covered one scone each. On the positive side, the scones, although broken, were tasty - not too short, moist on the inside and crisp on the outside, without a hint of rubberiness. However, it was impossible to tell which scones were plain and which were rhubarb, which was OK for me with only a slight aversion, but wouldn't have been acceptable for someone with allergies.

It must be said that the mini cakes on the top tier were lovely - a couple of macaroons, a chocolate brownie slice, a tiramisu mouse (N got that - I hate coffee), and two madeleine-type cakes. I was a bit too full to eat them, so squirrelled them away for later - which is absolutely fine by me.

To be fair to the staff at The Grange, they apologised profusely for (what seems to me to be) quite a series of faux-pas when it comes to afternoon tea. They explained that the Chef was having an 'off day' due to him introducing a new dinner menu and hosting two large parties that evening. Still, I tend to think that if you can't cope with an order, then admit it, rather than 'fobbing off' your customers with something less than desirable. They offered us another scone each, and shaved 50% off the price. This gesture did work to compensate a bit for an afternoon tea which hadn't lived up to our high expectations, and which had actually put a bit of a downer on our nice day out. I think that next time I'm in York, I won't seek out The Grange for an afternoon tea, but if I was staying there, or had some other reason to be in the vicinity, I wouldn't necessarily avoid it. Our experience was a low 4/10, but I doubt this would be repeated. The scones, cakes and mostly nice sandwiches mean it might normally get a 7/10, if the Chef was having an 'on day'.
Posted by CreamTea Crazy at 05:57