Mr CTC and I ventured north a few weeks ago, on our (rapidly becoming annual) visit to the Highlands. We love to sample all sorts of delights that Scotland has to offer, and this visit was no different - we indulged in many a whisky, fish and chips more than once, and even a deep-fried Mars bar!


On one of our excursions, we visited the Inverawe Smokery, near Taynuilt, near Oban. I'm not sure we went to the right place, although we followed all the signs, because we didn't actually see the smoke house, and instead had to settle for the Café and Shop, and a little walk along the river. When we saw someone else being served a cream tea, our eyes lit up, and we thought 'Well, it would be rude not to, wouldn't it?', so we ordered one each. It was a 'scorchio' hot day, so we couldn't leave our dog in the car, so we chose an outside table in the shade, and they were kind enough to bring our teas out to us.


Any disappointment caused by inadvertently missing the smoke house was rectified by the cream tea. It certainly ticked a lot of boxes. The scones were pleasingly triangular, and fruited, and warm. They were soft and crumbly in the mouth, although maybe could have benefited from a little more baking soda, to give them that fresh-baked taste. The cream was clotted, and we chose raspberry jam (we were in Scotland, after all!) Both were served in little pots - lovely. Butter was provided in those horrible little foil packets, but we could overlook that little faux pas. 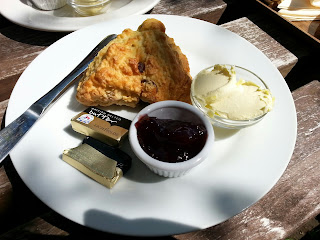 Oh, I should also mention the tea - served in stoneware pots, but these had pinched spouts, so they poured particularly well, and the Earl Grey tea (not Twinings for once), was rich and strong - how I like it. Not sure we'll make a bee-line for it next time we're in the area, but it certainly cheered up an otherwise slightly disappointing visit.